You won't find people yodelling or little girls called 'Heidi' amongst these picturesque, snow-capped mountains but you will be able to get a plate of spicy fried noodles. 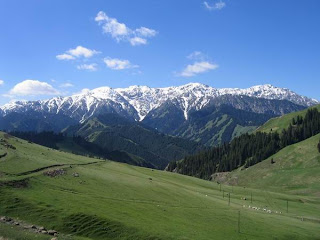 Incredibly, this Alpine landscape is in Western China, in a region known as Tianshan (Mountain of Heaven). It lies within the snappily-named Xinjiang Uygur Autonomous Region which sits snugly between Tibet to the south, Kazakhstan to the west and Mongolia to the East. 'Aprés ski' country, this ain't.

The nearest town (and main tourist hub) is Urumqi, claimed to be the most inland city in the world.

Once a barren land of snow and ice, centuries of climate change have turned Tianshan into a place of green fields and clear mountain streams. It's also a steadily growing tourist attraction as a writer for Chinaculture.org describes:

"Wanting to enjoy the scene I decided to have an early lunch at an open-air restaurant. It was so relaxing. Sitting there in the sunshine I enjoyed a large plate of spicy fried noodles while cows and horses grazed close by. Boats carried tourists across the lake's calm blue waters.

I kept thinking that I had finally made it to one of the most attractive places in China. My dream had come true." 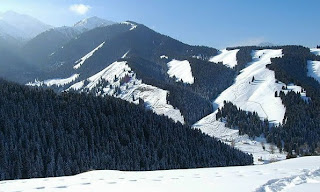 Read the full article here.
Posted by burntbreadboy at 1:04 am