How not to cheat in a university exam 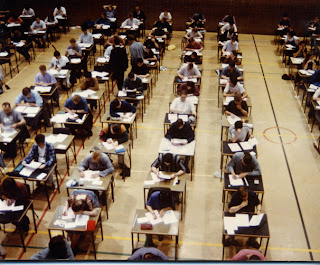 A couple of Chinese students at York University have given an object lesson in how not to cheat in an exam.

Qiu Shi Zhang, 23, couldn't face the stress of a three-hour business exam so he came up with a Cunning Plan: Get his mate, another Chinese student, to sit the exam in his place.

Putting his faith, I suspect, in the idea that all Chinese look the same to Westerners, Zhang must have thought his plan had a very high chance of success.

But there were two fatal flaws: First, all students had to show an ID card during the exam, and Zhang and his friend, whilst both being Chinese, actually bore no resemblance to each other in body size and shape. Oops.

Flaw number two: Zhang's mate is rubbish at business studies and wouldn't have been able to answer the questions anyway. Oops.

So all in all, this was a pretty stupid plan!

North Yorkshire Police were informed and officers arrived to arrest Xin at the end of the exam. They also had little difficulty in locating Qiu, who was found loitering nervously outside the building.

Xin pleaded guilty to fraud and Qiu admitted aiding and abetting the fraud. Each was sentenced to 100 hours of community service and ordered to pay £35 costs.

Full story here.
Posted by burntbreadboy at 10:12 am

Now I have serious doubt about their business acumen... Funny news around the world everyday.