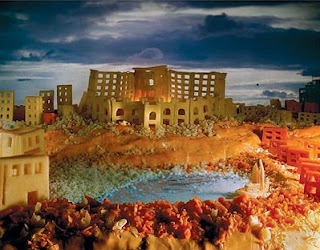 'Cockaigne' is the name of a mythical kingdom, first thought up in the 14th century, where all the inhabitants lead lives of total leisure and food and drink are abundant and endless.

It is also the name of a new exhibition of photographs by Scottish-born, London-based artist Gayle Chong Kwan. Using a variety of foodstuffs, from crab sticks to rice grains to cheese puffs, Kwan has created images that seem picturesque and appealing at first glance but sinister and repellent on closer inspection.

... in Eldorado (2004), the land of gold is in fact cheese puffs and snacks on sticks, with jacket-spud terrain and fluffy mashed potato mountains. Set on its dramatic, electricity-charged sky, it looks fabulous. Hansel and Gretel would have had a field day.

What is most appetising is the precision of the compositions. Lotosland (2004) consists mainly of plain, white rice, with a couple of puffed rice drystone walls and rice cake pillars. The texture and shadows of the foreground, however, are so well defined they appear to have been as painstakingly applied as any paint layered on to a canvas.

Her exhibition is on at the Manchester Chinese Arts Centre until September 14th.

Related: The 'bbc' causing a stir on the contemporary art scene
Posted by burntbreadboy at 5:09 pm