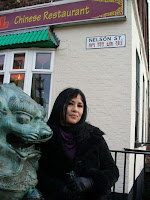 A new radio series charting the early history of the British Chinese community begins on Radio 4 on April 30th. Presented by Anna Chen, the series will cover a variety of topics, some familiar, some less so, as you can tell from the programme titles:

1. The First Chinese VIPs
2. The Creation of Chinatown: the myth and the reality
3. From Ship to Shore: experiences of Chinese seamen in Britain
4. Steam and Starch: life in a Chinese laundry
5. Educated in Britain : the history of Chinese students
6. Feet unbound: pioneering Chinese women in Britain
7. Mixed Blessings: growing up half Chinese
8. Artistic Pursuits: stepping out on Britain ’s cultural landscape
9. Screen Beginnings: the first British Chinese screen actors
10. Peking Duck… and Chips: early Chinese restaurants

The shows are on at 3:45 in the afternoon which means a lot of people won't be able to listen, but they should ber available on the BBC website after they've been broadcast. I'll update with links as I find them.
Posted by burntbreadboy at 12:17 pm

Hi,
I have a download link of this programme on my blog:
http://huqinblog.blogspot.com/2008/07/chinese-in-britain.html

It's the two 1-hour omnibus edition.

This might be useful for anyone who wants to listen to the series.