Has Hong Kong changed for better or worse since 1997? 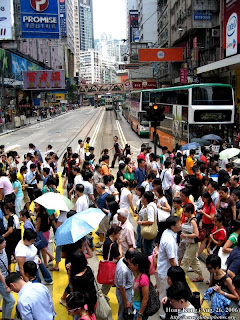 The 10 year anniversary of the handover is fast approaching. That's ten years out of the fifty that Hong Kong is supposed to enjoy without any major changes enforced by China. So, is it a case of "so far so good?"

Despite the 50 year pledge, China does of course influence Hong Kong politics in a way it never used to with regards to its endorsement of candidates. But at the same time, the handover has, I think, pushed democracy and civil liberties right to the forefront of Hong Kong political life and in people's minds. That's got to be a good thing.

I always hoped that in the post-1997 years, China might change more to become like Hong Kong, rather than vice versa. I'm hoping that between now and 2047, democracy not only fully takes root in HK, but starts to make inroads into China.

In this article, the Times' Gerard Baker assesses how Hong Kong has fared since June 30th, 1997.

Hong Kong had a disastrous few years straight after 1997: financial crisis; a property crash; severe acute respiratory syndrome (Sars) and political crises. It seemed to superstitious locals as though some evil feng shui had unleashed a dragon to devour the place.But it is back now, perhaps stronger than ever.

You can be cynical about this success. China has wisely decided it doesn’t want to kill the goose that lays its golden eggs of international finance. Journalists rightly worry about self-censorship by media owners eager to mollify Beijing. But China is changing too, not just in its economic character. It is quite feasible now that at the end of the 50-year period China will have moved much closer to Hong Kong’s system than Hong Kong will have shifted to China’s.

Posted by burntbreadboy at 1:16 am

Political intervention may be necessary at times in order to salvage an unfavourable situation to preserve the unity of the nation and the people.

Better a peaceful intervention than a military invasion.

And China would not emulate Hong Kong's western-style democracy. There will be democracy but of "Chinese characteristics" all over its territories.

I think Hong Kong lost its glitter a little not because of Beijing. Beijing did not rule and manage the territory. It's the Hong Kong people themselves who rules and manage it.

The problem lies in shift of investments back to Shanghai.

If anything, Hong Kong was "protected" by Beijing during the Asian financial crisis. And Hong Kong's economy and 'Disneyland' still relies heavily on mainland China.