Am I the only bbc who has never eaten 'cha yip dan'? 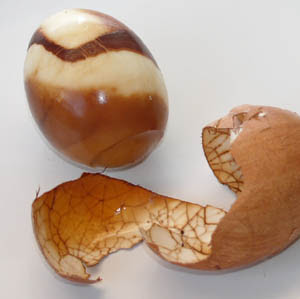 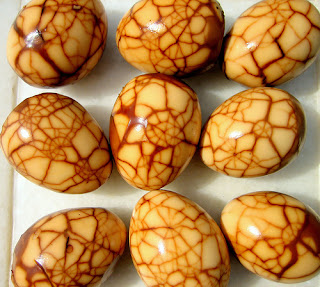 I was browsing a Chinese cookery book when I saw a recipe for 'tea eggs': chicken and quail's eggs boiled in seasoned tea.

I'd actually never heard of these before and it was only after a bit of Googling that I discovered that 'cha yip dan', as they are called in Cantonese, are a common snack throughout Asia. In fact, Wikipedia says Taiwan's 7-Elevens sell millions of them.

How have I managed growing up as a bbc - including numerous trips to HK - and not eaten one, solitary tea egg? I thought I'd eaten everything! :)

So that's my latest mission: To get me some 'cha yip dan'. No idea when this will happen but I'll post some pics when it does. If you're interested in trying to make them yourself, this seems to be a good recipe.

Posted by burntbreadboy at 7:51 pm