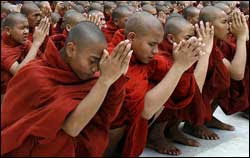 This is not strictly to do with bbcs but the fast-moving events in Burma (officially known as Myanmar) could be an important development in one of Asia's longest running human rights issues.

Burma is ruled by a military regime that has been harshly criticized by activists for decades, and the leader of the democracy movement, Aung San Suu Kyi, is one of the world's most well-known prisoners of conscience.

These latest protests seem to have been instigated not by politicians or activists but by the country's Buddhist monks, which will be significant in how the protests are resolved.

Are we about to see history being made in Burma?

The protests are getting a lot of coverage around the world. Here's one article from the Hong Kong Standard:

When 20,000 Buddhist monks, nuns and protesters marched through Rangoon's streets, a 50-year-old housewife broke into tears as she rushed to the sidewalk to cheer them on.

She said they were tears of joy because, like many in the country ruled with an iron fist by the military, she sees the monks as Burma's preeminent moral authority taking a stand on behalf of the people.

Fact of the day: Burma is the largest country by land area in mainland Southeast Asia.

Posted by burntbreadboy at 10:13 am