Chinatown to get £2million revamp 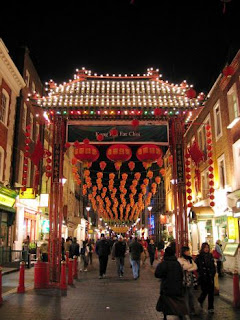 Photo: Wikipedia
The Evening Standard reports that London's Chinatown is to receive funding from Westminster Council to make the area more authentically Chinese.

The money will be spent on a number of improvements including the building of a wooden pagoda and the re-opening of a dedicated Tube exit from Leicester Square station.

The move is in stark contrast to the alleged plans to demolish the stone 'leung ting' shelter that sparked the 'Save Chinatown' Campaign back in 2004.

• Basing future building projects on the principles of feng shui, an ancient system of design principles which claims to enhance health, wealth and positive energy.

• The reopening of Leicester Square Tube station's entrance of Little Newport Street and Charing Cross Road, which will give Chinatown its own dedicated Tube entrance. The entrance has been closed since 1978.

• The creation of nine dragons, replicating the carvings which adorn Beijing's Beihai Park and believed to be symbols of cosmic energy. These will help define the entrances to Chinatown.

• A new timber pagoda open to the public in Newport Place.

• Gold lanterns to light the streets.

Full story: This is London
Posted by burntbreadboy at 12:28 pm

Chinatown is really just a bland, little novelty street devoid of any atmosphere. What a joke