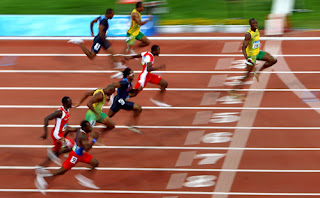 Photo: Beijing 2008
By now we all know that China claimed the top spot of the Beijing 2008 medals table with a massive total of 51 golds.

OK, the USA disputes who the 'top nation' is; They prefer to count the total number of medals won rather than just golds. Surprise, surprise this puts the USA at the top of the table.

I'm sure they will argue that one for years to come but for me, the medals table gets a lot more interesting once you start taking into account the total population of each country competing.

Looking at the figures this way gives you a statistic of 'one gold medal for every _____ people' and it could be argued that the lower this figure is, the more of an achievement it is for that country.

A full medals table compiled using this method can be seen here: www.symworld.com

As you can see the nation that tops the table is now Jamaica with one gold medal for every 452,333 people.

Australia, in 7th place, finishes above Britain (the country viewed as its Olympic rival) in this table.

The question, then, is China's medal tally less of an achievement when viewed in this context? Or is it just the final total that matters?

I'm sure there will be differing views but personally I think it's an interesting, alternative view of the medals table. At least it gives Jamaica some recognition for achieving what it did whilst having a relatively tiny population.

At the end of the day, does it actually matter which country comes top of the table? This is a very interesting observation from Guardian blogger Andy Bull in his article "Why medal tables have nothing do with the Olympic spirit":

"The Olympic Charter ... bears increasingly little resemblance to the reality of the event. That does not mean that the charter is worthless. The values it defines are still worthy of aspiring to.

Article six reads: "The Olympics are competitions between athletes in individual or team events, not between countries."

Of all the sentiments enshrined in the charter, this is by far the most abused." 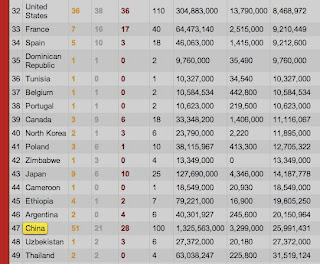 Posted by burntbreadboy at 12:06 pm