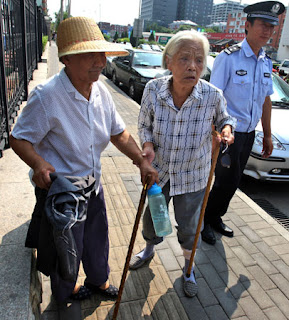 I found this interesting report from Slate.com about China's policy of 're-education through labour'.

Criticized by some both inside and outside China, the system allows detention without criminal charges for up to four years and is often used against local dissidents who wish to do nothing more sinister than stage a protest.

The Slate article begins with the case of Wu Dianyuan and Wang Xiuying, two women in their 70s sentenced to year of re-education through labour because they wanted to complain about the amount of compensation they were offered for being forced to move as a result of local re-development works.

The emphasis in re-education-through-labor is on the labor: People sentenced to so-called laojiao may spend as much as 12 to 14 hours a day, according to some accounts, doing work like construction, making bricks, or mining. (U.S. Customs investigations have also implicated Chinese prison labor in the production of binder clips and diesel engines.)

That work serves as both a means of punishment and as a major source of revenue for a camp.

Posted by burntbreadboy at 2:22 pm